The Art of Baseball 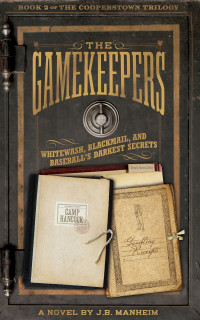 Artwork by Gary Cieradkowski
May will see the publication of Books 2 and 3 of The Cooperstown Trilogy, by J. B. Manheim. As is the case with Book 1, This Never Happened: The Mystery Behind the Death of Christy Mathewson, the cover designs and art will be done by baseball artist and historian, Gary Cieradkowski. The GameKeepers (Book 2) is the story of a secret organization tasked with concealing Baseball's deepest and darkest secrets—and what happens when the enterprise is threatened to be exposed.

We have been fans of Gary C's work for many years, and he's been doing book covers for us for the last two. Gary's first project for SGB was the reissue of the Sol White's Official Base Ball Guide. The classic book now had classic cover art.

Some great news from Studio GaryC is that Gary just published a new book of his own, a collection of essays that highlights and expands on some of his work from the last several years. It's called 21: The Illustrated Journal of Outsider Baseball, and this is a link to his announcement.

In the new book, Gary shares the story behind some of his favorite and most interesting projects—taking readers through the creative process from concept through finished piece. And because Gary's work is both great baseball history AND art, there is something for both readers interested in research and writing as well as the creation of art. We are honored that one of the projects covered in "21" is our edition of Sol White's Official Base Ball Guide. 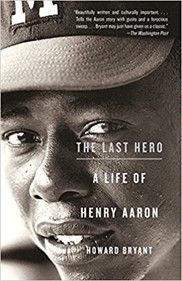 As noted in the last newsletter, we are moving our "Gibby" discussions over to the blog. Today's installment is going to focus on one of baseball's greatest players (and people) ever, Henry Aaron, whose birthday was on February 5th. Aaron would have turned 88 this year, a number the significance of which need not be explained.

There are many books about Aaron, of course, ranging from very good to pretty bad. The first published may have been The Hank Aaron Story, in 1961, by Milton J. Shapiro, who knocked out a bunch of YA-level sports bios in the 1960s. Yes, parts of the book are decidedly cringeworthy. Shapiro spends time trying to dispel the "Stepin Fetchit" stereotype held of young Aaron, but manages to worsen it with quotes from Aaron that use racist dialect, while providing examples of Aaron's baseball savvy "complex" meant to show that he's actually not an idiot. Luckily, I was oblivious to such things as a kid in the 1960s and read the book many times.

One of the very best works on Aaron is The Last Hero: A Life of Henry Aaron, by Howard Bryant. Bryant's book is probably THE definitive biography of Aaron and may belong on the list of Greatest Baseball Books Ever in that category. It captures the near superhuman inner strength Aaron possessed, and the added challenge he faced as a supremely proud but very private person thrust into a position of worldwide fame and, as Aaron saw it, responsibility.

The Last Hero is a great character study, but the research is also fabulous, starting with Aaron's childhood and his extraordinary parents, through his development as a player and person, to his post-career life growing into the role of bigger-than-life icon. The section on the Braves of the late 1950's provided a lot of details I had not read before. In the 4 years between 1956 and 1959, the Braves lost two pennants on the last weekend of the season and blew a 3-1 lead in one of their two World Series. It can be argued that the Braves of Aaron, Mathews, Spahn, and the rest were as much underachievers as Bobby Cox's Braves teams of the 1990s.

George Plimpton's One for the Record is certainly no GBBE, but it's quite interesting. The text is an extension of Plimpton's assignment by Sports Illustrated to follow Aaron around in the weeks leading up to home run 715. The book has the feel of having been thrown together to cash in on Aaron's fame in 1974, weighing in at only about 100 pages of text followed by 40 pages of Aaron's home run stats. One doubts that Plimpton had anything to do with the appendix.

The text, however, is Plimpton through and through. Aaron is at the center of the narrative, of course, but kind of like the sun, with the main focus being on all those around him—teammates, opponents, announcers, former players, family. This balance may have been struck out of necessity due to Aaron being well, rather busy, but Plimpton makes the most of the situation and succeeds in both painting a graceful and appropriately reverent portrait of The Hammer while also providing insights into those amazing weeks not available anywhere else.

It's an inside look from numerous angles and points of view, sprinkled with dozens of great stories and quotes. Several opposing pitchers are interviewed, including the erudite Al Downing (also #44), and longtime foe lefty Claude Osteen, who allowed 13 home runs to Aaron in his career, second most to Don Drysdale. In one scene, Osteen recalls a game against the Braves that his father attended, whom Osteen had not seen for some time. "Just don't give up one to Aaron," Osteen's dad greeted him with, before remembering to tell his son "Hello."