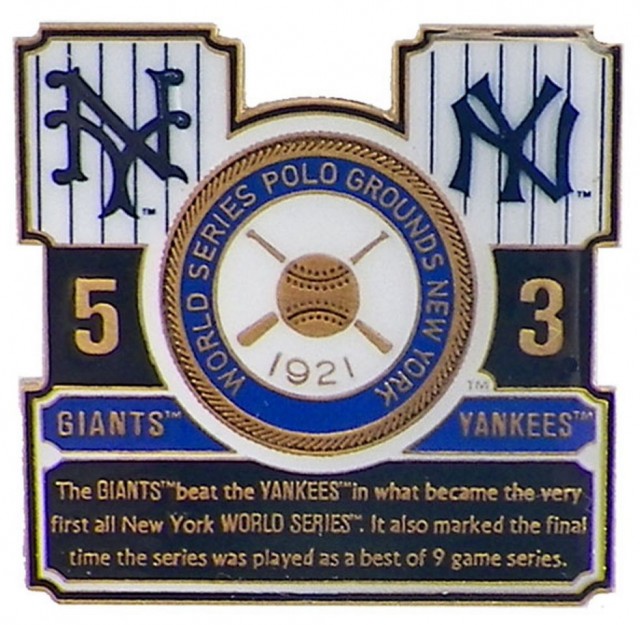 The much-anticipated 1921 World Series featured John McGraw's New York Giants, dedicated practitioners of the dead-ball era's "inside game", and the New York Yankees, who relied on the "power game" exemplified by Babe Ruth, who was coming off of what was arguably his best year ever statistically. This was the first World Series appearance by the Yankees, who have gone on to play in the Series a record 40 times. The 1921 Series was a closely contested matchup that ended on a double play featuring a baserunning miscue.

The Series was the last of the experimental best-five-of-nine series, which the Giants won five games to three. All eight games were played at the Polo Grounds in upper Manhattan, New York, each team alternating as the nominal "home team" since the Yankees had subleased the stadium from the Giants for the 1913 through 1922 seasons, so that it was the home park for both teams during the regular season in those ten years. This marked the first time in World Series history that the series occurred at a single site. It happened again the following year in the same place with the same two teams, and in 1944 at St. Louis' Sportsman's Park between the Cardinals and the Browns. For New Yorkers, this was the first subway Series in World Series history. It was also the first World Series to be broadcast on radio, with Grantland Rice covering the games live through Pittsburgh's KDKA. It was rebroadcast on WBZ in Massachusetts. Announcer Tommy Cowan also recreated the games over Westinghouse-owned WJZ in Newark as he listened to phoned-in reports from the stadium.[2]

Because of an infected arm and a bad knee (which he wrenched in Game 5), Babe Ruth did not start the final three games,[3] appearing only as a pinch-hitter in the final inning of Game 8. Following the Series, Ruth and Bob Meusel did some postseason barnstorming, against the rules for Series participants at that time. Both were suspended for a number of games at the start of the 1922 season. Ruth filed a personal appeal with Commissioner Landis, who upheld their suspensions but agreed to rescind the rule effective the end of that season.

Then New York Governor Nathan L. Miller, described as "a big baseball fan" by The New York Times, made plans to attend games as a guest of the National Commission (the Commissioner of Baseball).[4] The Series drew fans to New York City from across the continent, from as far west as California and Mexico to as far south as Cuba. Hotels were booked up, and both the New York Central and Pennsylvania Railroads made plans to add cars and run their trains in sections if necessary to handle the extra traffic expected. Harry L. Davis, then the Governor of Ohio, was expected to attend the games as were several other VIPs of the time.[5]

This was the fourth World Series for Giants' assistant coach "Eee-yah!" Hughie Jennings, who had managed young Ty Cobb and the pennant-winning but Series-losing 1907, 1908 & 1909 Detroit Tigers and had been brought in as an assistant coach for the Giants by John McGraw the previous October after Jennings had resigned from the Tigers. The two were teammates on the old Baltimore Orioles in earlier seasons.[6]

Several players on both teams didn't start the 1921 season with either the Giants or the Yankees, and several others moved to other teams during the regular season earlier that year. For the Giants, Johnny Rawlings, Irish Meusel, Casey Stengel and Red Causey started the season as Philadelphia Phillies, who finished last in the National League that year. Outfielder Bill Cunningham had played for the Seattle Rainiers of the Pacific Coast League, nor did Cozy Dolan or Red Shea start the season with the Giants, while the Yankees acquired outfielder Elmer Miller and pitcher Tom Rogers during the season. Nonparticipants from either team in the Series included Curt Walker, Lee King, Johnny Monroe, Rube Benton, Goldie Rapp, Ping Bodie, Tom Sheehan and Tom Connolly.[7]

Tweet
The Anguished Joy of Sparky Lyle
TONY CONIGLIARO: “Tony, We Hardly Knew You” Part I