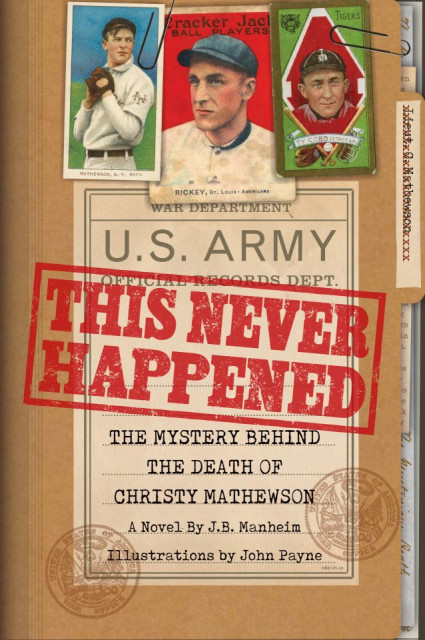 Summer Game Books is very excited about the upcoming publication of a new title This Never Happened: The Mystery Behind the Death of Christy Mathewson. We have never published anything like it. We have never read anything like it. It is fiction, to be sure. But it is more than that. The book is nothing short of a coherent alternative narrative for one of the core stories from early 20th century baseball history.

Not every novel gets its start with authentic WWI documents that go on the auction block for thousands of dollars, and combine to challenge a largely accepted version of history. Real documents. Details that don't add up. And lots of "Why" questions swirling around the motivations of the characters and entities involved. That's what makes this story pack such a big wallop—that this mystery unit actually existed. The unit was apparently designed for propaganda, at least in part. But then sort of hidden away. The story is full of imagination and authentic historical details, a great combination!

The traditional history tells us that early God of the Game Christy Mathewson, a volunteer in the Chemical Warfare Service during World War I, was exposed to poison gas in a training accident in France that led to his premature death.

But accounts from some close to Mathewson and other evidence—some recently discovered—cast doubt on this story. And the question is raised: If the poison gas incident is merely a myth, what really happened? What uncomfortable truths might lie behind the official history, now thoroughly entrenched in baseball lore? What secrets—perhaps involving the institution of baseball itself—are being protected?

This Never Happens jumps off from authentic recently discovered documents about a WWI army unit that included all-time baseball greats Mathewson, Honus Wagner, "Big Ed" Walsh, the fiery Ty Cobb, and others. In a seamless blending of fact and fiction, author and political scientist JB Manheim imagines answers to the mystery behind Christy Mathewson's death. It's a multigenerational story filled with intrigue, adventure, and a shocking event that triggers a cover-up, one that continues to this day.

Although This Never Happened is a fictional tale, certain facts woven through the drama are beyond dispute, leaving readers to wonder—if this never happened, what did? Get your copy today.